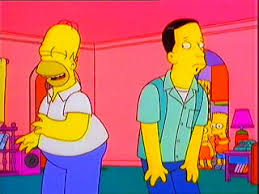 Exploring one of television's more prominent taboos, tensions rise when John, a gay gift-shop owner, becomes acquainted with Marge, Bart and Lisa, but gets a little too close to them for Homer's homophobic taste.

Worried that Bart might follow John's flamboyant ways, Homer concocts some hilarious, albeit ridiculous ways to keep Bart "straight." First, he made him stare at half-naked women in a cigarette ad on the highway, but Homer's attempts at doing his "fatherly duty" are in vein, as evidenced by their trip to a gay steel mill (incidentally, the show's high point).

But when, on the advice of Moe and Barney, Homer takes Bart hunting in the hopes of reviving his masculinity, father and son find themselves the targets of some angry reindeer, and it's John who saves the day. Homer ultimately accepts John as a friend, and the episode brilliantly yet discreetly teaches a lesson in tolerance.

Best line: "You know me, Marge -- I like my beer cold, my TV loud, and my homosexuals fa-laaaming !" - Homer 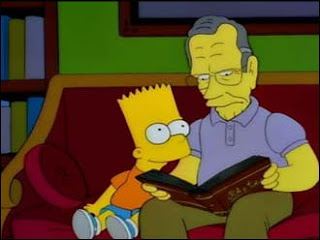 The family is in for quite a treat when former President George Bush becomes their new neighbor. But what looks like a great addition to Evergreen Terrace turns sour when Bart, emulating the classic Dennis the Menace premise, tries to befriend a grumpy George.

Bart's "innocent" gestures lead to a series of mishaps, culminating in George spanking Bart for destroying his memoirs and igniting a feud with Homer as a result. After a series of pranks aimed at each other (such as Homer gluing a clown wig on Bush), the two men end up in a fistfight, and an exasperated George decides to check out.

8. The Mysterious Voyage of Homer ( http://ipodpspmovietv.weebly.com/voyage-of-homer.html ) 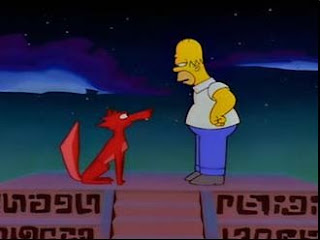 Homer attends the Annual Chili Cook-Off and, confident in his ability to consume anything, digests several dangerously hot peppers (prepared by Chief Wiggum), whose side effects include hallucinogenic visions.

What ensues is a journey of self-discovery as Homer looks for his soul mate after having a conversation with a talking coyote (guest star Johnny Cash) during his dream-like state.

After looking high and low, he winds up at the lighthouse, thinking its keeper is his soul mate, but is disappointed when he discovers that it's operated by a computer. Sure enough, a worried Marge comes looking for him, and Homer realizes that his soul mate was right under his nose all along.

7. The City of New York vs. Homer Simpson ( http://ipodpspmovietv.weebly.com/new-york.html ) 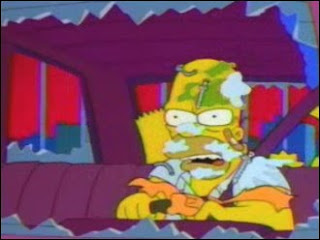 The family's voyage to the Big Apple is courtesy of Barney, who steals Homer's car while slightly intoxicated and leaves it somewhere in the city.

While other episodes involving trips are a little disappointing, this one offers a nice blend of hijinks (Homer trying to find somewhere to go to the bathroom and attempting to take the boot off his car) and a nod to the "colorful" residents of New York City (like the weird people on the subway). Throw in a catchy, Broadway-like number about the Betty Ford clinic and you've got yourself yet another 30 minutes of clever storytelling.

Best line: "Of course you'll have a bad impression of New York if you only focus on the pimps and the C.H.U.D.'s." - Marge

Proving that when bad luck strikes, Homer is not far behind, Apu finds himself on the street after Homer eats some spoiled meat from the Kwik-E-Mart, which leads to Apu's dismissal. In this episode, Homer also helps the police get incriminating evidence against poor Apu by going undercover.

Feeling guilty, Homer invites Apu to stay with him. But as James Woods (starring as himself) becomes the store's new owner, Apu decides to fly to India in search of the world's first Quik-E-Mart. Homer, going along for the ride, foils Apu's plan to gain some spiritual guidance. It isn't until a depressed Apu saves James Woods' life during an attempted robbery at his former store that he gets his job, and his sanity, back.

Sad but true; not all of the show's Halloween specials have been masterpieces. Number five, however, offers three completely different tales, each one boasting a potent combination of wit and humor.

The first is a brilliant parody of Stephen King's The Shining , in which Homer goes crazy while he and the family are taking care of Mr. Burns' mansion in the hills. The second, "Time and Punishment," involves Homer traveling back in time after his toaster short-circuits, while the third, "Nightmare Cafeteria," finds Bart and Lisa the target of children-eating faculty. The laughs never end and the pop-culture references run amok in an episode that does a great job of incorporating Halloween-themed stories with the standard Simpsons charm.

Best line: "No TV and no beer make Homer... something something." - Homer

Demonstrating their uncanny ability to capitalize on current trends, the writers brilliantly spoof VH1's perennial hit, Behind the Music . Adopting the documentary-like format, viewers are treated to a behind-the-scenes look at the rise and fall of one of television's most beloved families.

We learn about the Simpsons' humble beginnings, and the demo tape that got the family their big break at FOX. And as the show's popularity soars, so do the characters' egos and spending habits (as seen in their using money for toilet paper). Then, like so many rock band legends, the "group" breaks up and the fab five attempt solo projects.

But as their personal lives spiral out of control -- such as Bart's reckless behavior (which lands him in jail) and Homer's addiction to painkillers -- their friends trick them into performing together at a benefit, which ultimately brings the family back together.

Best line: "I first knew the show was a hit when I walked into school and a kid was wearing a Bart Simpson T-shirt. FOX had an endless supply of clever slogans, man." - Bart

3. Homer at the Bat ( http://ipodpspmovietv.weebly.com/homer-at-the-bat.html ) 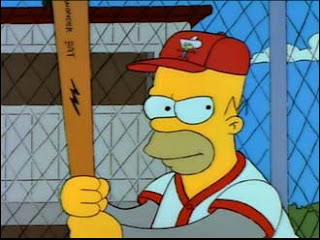 In one of the show's more memorable moments, Mr. Burns decides to recruit all-stars for his company's softball team to ensure victory. But when a series of misfortunes befall the major leaguers (Ozzie Smith gets lost in a mystery spot, Jose Canseco is busy saving a burning house, and Roger Clemens thinks he's a chicken), it's up to the good old Springfield residents to save the day.

"Homer at the Bat" is effective as it combines a slew of guest stars with some hilarious material for Homer (the ball that bounces off his head wins the game), while using the national pastime as its backdrop. 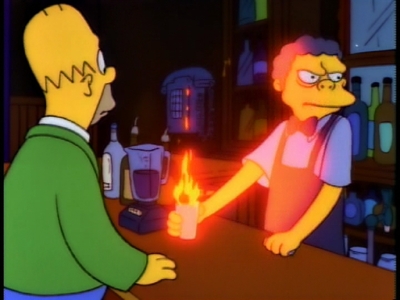 As one of the early episodes that helped solidify the show's sharp wit and satirical ability, "Flaming Moe's" has everything a classic Simpsons episode should have: gut-busting humor, nifty parody, and some superstar cameos to seal the deal.

It begins with Homer sharing a secret drink recipe with Moe who, in turn, uses it to save his ailing business while taking all the credit. The drink catches on, and Moe's dive turns into a hotspot. But when an enraged Homer reveals the secret ingredient (cough syrup), the bar reverts back to its former state and Homer and Moe revert back to being friends.

Other highlights include a performance by Aerosmith (in a guest-starring role), Bart actually apologizing to Moe for one of his infamous prank calls, and a memorable spoof of Cheers ' theme song.

One has to wonder if the sheer brilliance of this episode will ever be matched in the future. The Simpsons has always been a master at paying homage to some of the great iconic moments in pop culture. This one is no exception, as it parodies Martin Scorsese's blockbuster with ingenious precision.

Kelsey Grammer, playing the recurring role of Sideshow Bob, escapes prison and seeks revenge on Bart for putting him there in the first place. But even as the "Thompson" family relocates to Terror Lake with new identities, Bob manages to track them down. Not to fear, for a resourceful Bart is able to trick Bob into singing the score to H.M.S. Pinafore , and of course, Bob takes the bait and falls right into the hands of Springfield's police.

So what makes this episode stand head and shoulders above the rest? It dares to feature a childish gag in which Bob walks onto a rake nine times, hitting himself in the face each time -- something other formulaic sitcoms wouldn't even attempt to do.