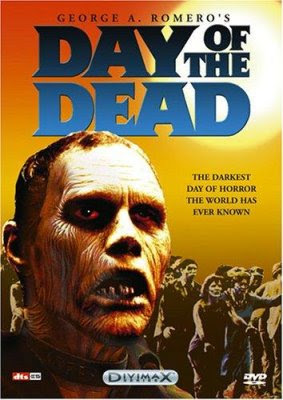 Day of the Dead was the final installment in George Romero's trilogy (preceded by 1968's Night of the Living Dead and 1978's Dawn of the Dead ). The movie begins with a zombie plague having already overrun the Earth, leaving a small group of scientists and military personnel in an underground bunker in Florida, trying to figure out how to reclaim the planet. The close quarters lead to short tempers among the humans -- meanwhile, the zombies begin infesting the bunker.

Day of the Dead was one of the first zombie flicks to focus on how testy humans can get during a zombie infestation, a story element that nearly every one of its successors would pick up on. Still plenty of living dead though; within the story, zombies are said to outnumber humans 400,000 to 1. So, yeah, a whole lot of zombies.

Best zombie kill scene: The ultra-graphic scene of a zombie getting his head split by a shovel is just outrageous. 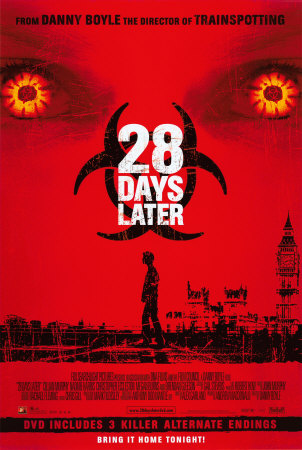 A lot of hardcore horror fans weren't happy to discover that the creatures in 28 Days Later moved incredibly quickly, rather than at the leisurely gait that the undead traditionally walk with. But scary movies need swift zombies -- not ones that you can run circles around. And this is one hell of a scary movie.

In keeping with more contemporary fears, the zombie plague in 28 Days Later comes about as the result of some mismanaged genetic research. All of London turns undead, followed by the rest of the country and, presumably, the world. It's up to a bike courier, Jim, and his small posse to sustain the human race and avoid the blood splatters that will turn them into frothing, flesh-hungry freaks. And trust me, there are a lot of blood splatters to dodge in this flick.

Best zombie kill scene: Jim smokes the zombie priest in the head with a bag full of Pepsi cans. How's that for product placement?

The premise of this flick is one of the craziest you'll ever come across. Iraqi agents smuggle a dangerous biochemical agent into Hong Kong by concealing it in bottles of soda. Two video game bootleggers, Woody Invincible and Crazy Bee, inadvertently unleash it on the public, spawning a zombie scourge in their local shopping mall.

This Hong Kong production captures the flavor of '90s American horror flicks perfectly: Lots of blood and guts for the traditional fan, packaged with humor and tongue-in-cheek twists for everyone else.

Rupert Everett plays Francesco Dellamorte, a man with the unenviable task of standing watch over a cemetery whose inhabitants rise from the grave several days after burial. Having grown accustomed to a dreary existence of splitting open zombie skulls and reburying them, Dellamorte is happily surprised by the arrival of a mysterious young widow (luscious Italian model Anna Fulchi). Unfortunately, she croaks fairly early in the story -- but don't worry, she'll be back.

Dellamorte Dellamore is touted as one of the more intelligent zombie movies out there. Luckily, that doesn't prevent it from being entertaining and funny. Nor does it prevent Anna Fulchi from being outstandingly hot. As for gore, you can't ask for much more than a school bus/motorcycle gang collision.

Best zombie kill scene: Talk about a bad time to rise from the dead: A zombie emerges from the grave to discover Francesco banging his widow on his own burial plot! Francesco resolves the situation by taking out the section of the zombie's brain that controls jealousy... along with some other parts. 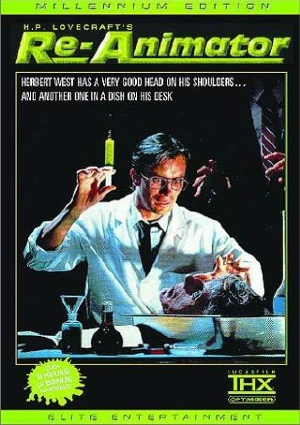 Medical student Herbert West moves from Switzerland to America to continue his studies on reviving the dead human brain. His re-animator injection fluid seems to be pretty effective, but there are still a few violent side effects to be worked out. Suffice it to say, Dr. West's plans to "conquer death" don't pan out.

The Re-Animator DVD includes original trailers and TV spots, all of which warn that this flick isn't for the squeamish. That's not just marketing spin: You'll be doing a lot of squirming on your couch. But it's Jeffrey Combs' performance as the psychotically detached Herbert West that propelled this movie onto the list.

The Italians love their gore flicks, and their countryman Lucio Fulci made some of the best ones out there. Zombie is probably his best known, no doubt in part because it followed on the heels of George Romero's enormously successful Dawn of the Dead (1978). Fulci even went so far as to first name the flick Zombi 2 in an attempt to trick audiences into thinking it was a sequel to Romero's movie (which was released as Zombi in most of Europe).

That's not to say that Fulci's Zombie doesn't stand on its own. The story's fairly straightforward: A snoopy journalist and his dimwitted female companion set out to explore a mysterious Caribbean island, and discover that voodoo has turned most of the locals into, well, you know what. But the island atmosphere is chilling, the score is effectively creepy and, given the time period, the makeup work is very impressive. Plus, Auretta Gay is a total babe in her role as Susan -- and Fulci gives us a nice, extended shot of her wearing nothing more than a translucent thong.

That's right: The remake made the list and Romero's 1978 original didn't. And even though I know you zombie enthusiasts are about to start firing off hate e-mails, what can I say? The remake is simply a better, more entertaining movie. Crow all you want about how Romero's film was brilliant for its time, but we ain't in Romero's time no more. Ours is a time that appreciates gushing neck wounds, cars careening into gas stations, and zombie-consuming fireballs. And Dawn of the Dead delivers all that, and more.

The story in here is really nothing extraordinary: Zombies take over city, humans take refuge in shopping mall and then try to fight their way out. The direction (courtesy of Zack Snyder), however, elevates Dawn of the Dead into a class of its own. The first 20 minutes of this movie are pure chaos, and you'll be giggling nervously for the remainder of it.

Best zombie kill scene: The survivors use a sniper rifle to pick out zombie celebrity-lookalikes in the parking lot.

Army of Darkness (the final installment in the Evil Dead trilogy) was produced on a fairly meager budget, and it shows: The set backgrounds are ridiculously obvious matte paintings and the execution of the special effects is really hit-and-miss. Still a great watch though, thanks to an incredibly creative director in Sam Raimi (who went on to direct the Spider-Man franchise) and a hilarious performance from B-movie king Bruce Campbell in the leading role.

Campbell plays Ash Williams, a loyal S-Mart employee who finds himself transported back in time to medieval England. Booking a return trip requires finding an ancient text of spells, the Necronomicon, the recovery of which raises an army of the dead. With his own army and some 20th century technology (a shotgun, a chainsaw and a 1973 Oldsmobile Delta-88), Ash wages war on the zombie hordes. No real scares in this one, just a lot of one-liners and slapstick comedy.

Best zombie kill scene: Ash mounts propeller blades on the front of his Oldsmobile and takes a spin in the castle courtyard. 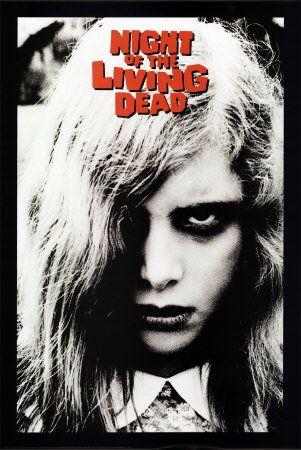 The infestation in this dated zombie flick starts Cold War-style: A mysterious satellite crashes to Earth, spewing radiation that gets the dead walking again. An assortment of survivors make their way to an abandoned farmhouse and steel themselves to defend civilization.

Best zombie kill scene: No debate here: The final kill. If you haven't seen the movie yet, I won't ruin it for you.

A decade before Peter Jackson wrapped up his Lord of the Rings trilogy, he directed the best zombie movie ever made. If you haven't heard of Dead Alive before, that might be because you're living in one of the countries where the full version of this flick has been banned. With good reason: This movie is teeming with gory scenes, one of which required the use of five gallons of fake blood per second .

The humor in Dead Alive will stick with you more than the effects, however. Timothy Balme plays Lionel, a New Zealander suffering from the psychological issues that come with an overbearing mother. Personal salvation comes in the form of a new girlfriend, but Lionel's blossoming romance is disrupted by the living dead. Coming to terms with his inner demons suddenly involves tearing out zombies' innards.

The combination of comic timing and flesh splatters makes Dead Alive the perfect zombie movie. Peter Jackson may not have taken home 11 Oscars for this one, but it made the top of this list.

Best zombie kill scene: The zombies take over Lionel's mother's house and throw a rockin' zombie party, complete with booze, loud music and even some sweet zombie lovemaking. Lionel busts it up, with the help of his trusty lawnmower.
_________________
NEW MOVIE POSTED EVERY DAY SO COME BACK TOMORROW IF YOU WANT A NEW MOVIE